Formerly called hydropsy or dropsy, edema is the abnormal accumulation of fluid inside the interstitium and is clinically explained as being a swelling. Interstitium refers to body cavities (one or more) or locations underneath the skin. Generally, the balance of homeostasis is what determines the interstitial fluid amount. Impaired removal or increased secretion of this fluid is what results in edema.

There are many types of edema and edema grading generally depend on the depth and duration of the dent.

Edema generally accounts for ten to thirty percent of bodyweight. However, in severe kwashiorkor cases, the proportion can even reach 50%.

Pitting edema is graded on a scale of one to four. The scaling depends on both the “pit” leaves and depth and how long the pit will remain. 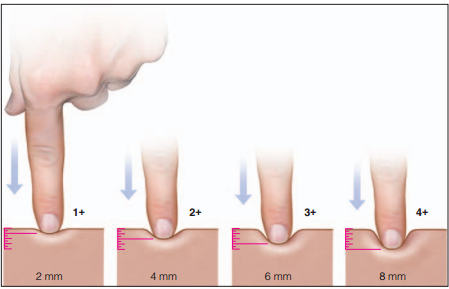 Watch a video for pitting edema: