Also called gastric ulcers, stomach ulcers are open lesions that develop on the stomach’s lining. Stomach ulcers can also occur in some parts of the intestines that are right past the stomach. Such ulcers go by the name duodenal ulcers. Both duodenal and stomach ulcers are at times also known as peptic ulcers. The two major causes of stomach ulcers are NSAIDs (Non- Steroidal Anti-Inflammatory Drugs) like aspirin or ibuprofen and H.pylori (Helicobacter pylori) bacteria. H.pylori is known to cause irritation in the lining of upper intestines or stomach which can result in ulcers. 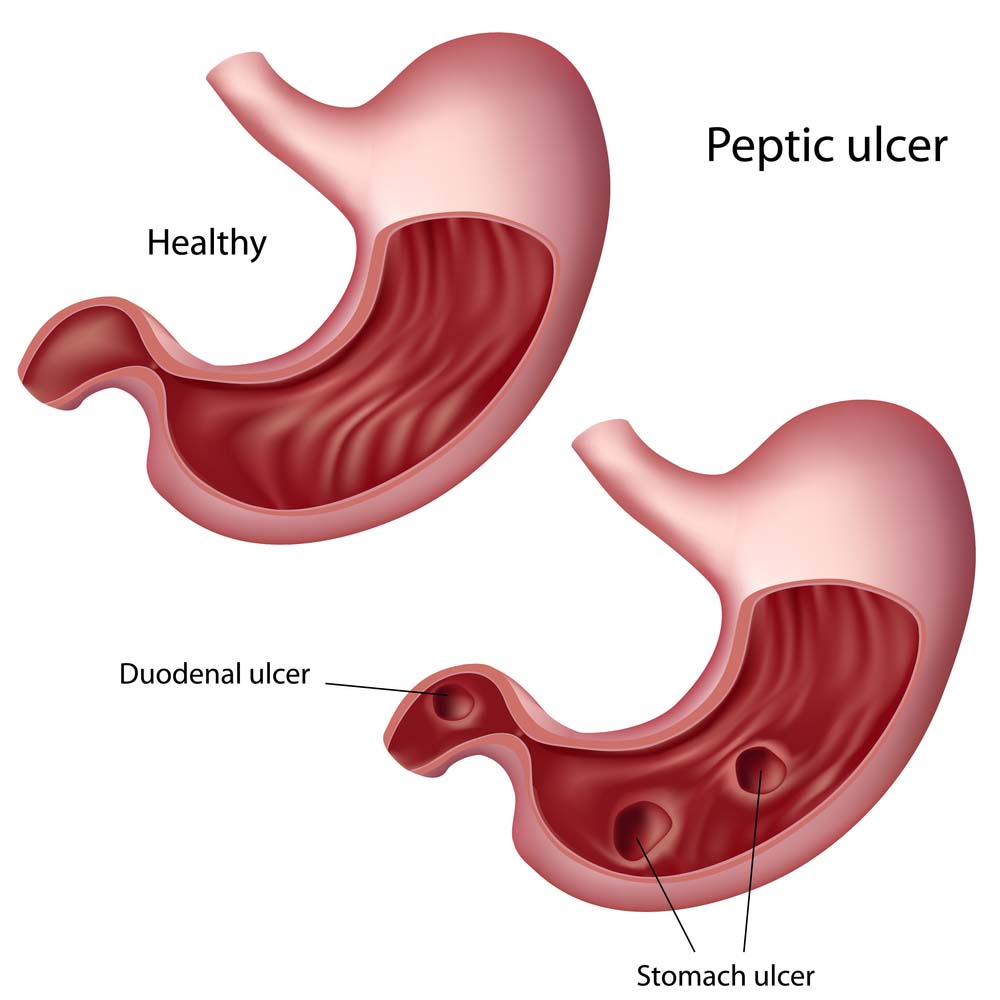 Choose a diet that consists of fruits, whole grains and vegetables. Failure to eat foods that are rich in vitamins will slow the healing process of ulcers.

When you use painkillers on a regular basis, you may end up with stomach ulcers. Therefore, you can inquire from your doctor whether medications like acetaminophen can be a good alternative for you.

Stress has been known to worsen the symptoms and signs of stomach ulcers. To avoid this, you should take up stress management techniques like exercise, yoga, etc. If these do not work, you should examine your life, identify the source of stress, and deal with it accordingly.

Smoking is known to interfere with the stomach lining thus making the stomach more predisposed to ulcer development. Smoking also causes an increase in stomach acid, which irritates the lining.

Excessive consumption of alcohol tends to erode and irritate the intestines and stomach mucous lining causing bleeding and inflammation.

These work by blocking protein action known as proton pumps. Proton pumps are partly responsible for the production of stomach acid. When stomach acid is reduced, further damage is prevented thus promoting speedy and natural healing.

These block histamine action. Histamine is responsible for stimulating stomach acid production. The most used H2-receptor adversary for stomach ulcer treatment is ranitidine.

The aforementioned treatments mostly take some hours before they start working. Therefore, your doctor might recommend additional medication that might help provide relief from short-term symptoms. The medications that can be used here are alginates which help in production of a protective stomach lining coating and antacids which neutralize stomach acid in the short-term.

Antacids are best taken when you expect symptoms or when you are experiencing the symptoms like during bedtime or after meals. Alginates should be taken after meals. You should not take these medications an hour after taking PPIs or ranitidine because they may obstruct the effects.

5. NSAIDs and Its Uses

If the stomach ulcers are as a result of taking NSAIDs, your doctor might want to review your intake of these medications. You will mostly be advised to take alternative painkillers that are not associated with ulcers like paracetamol.

If you take aspirin (low dose) to reduce the risks of having blood clots, your doctor is the one to decide whether you can continue taking aspirin or not. If taking of aspirin is discontinued, in most cases it is resumed after a couple of days. In such a case, the patient is given aspirin and a PPI so that further ulceration is prevented and the results are very effective. Should your doctor find it necessary for you to continue taking the NSAIDs, s/he will prescribe a long-term solution of a H2-receptor antagonist and a PPI.

Take note that there are potential risks and drawbacks associated with the continued use of NSAIDs. Their continued use will most likely lead to an additional stomach ulcer and you also risk experiencing severe complications like internal bleeding.