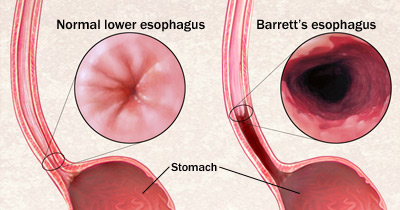 The oesophagus is the muscular tube or gullet that connects the oral cavity to the stomach. Food passes through the oesophagus, which is normally lined in the inner wall by flat cells. People who have a condition called Barrett's oesophagus (also spelled Barrett’s esophagus) have abnormal cells lining in the lower gullet, and an increased likelihood of developing cancer in the oesophagus. If you have Barrett’s oesophagus, consult a doctor to determine if precancerous changes are developing in your oesophagus. If so, you may be advised to seek treatment to reduce your risk of cancer.

What Is Barrett's Oesophagus?

Barrett's esophagus (named after the person who first discovered it) is a condition that affects the lower esophagus. The esophagus (or oesophagus) is the gullet or muscular tube that is lined inside with pinkish-white squamous cells. These cells are characteristically flat. However, people who have Barrett's oesophagus develop cells that are tall (columnar) and red. These columnar cells develop in the lower end of the esophagus near the stomach, which is normally lined with similar cells. Therefore, the condition is sometimes also called columnar-lined oesophagus.

What Are the Symptoms of Barrett's Oesophagus?

Some people who have Barrett's oesophagus do not experience any symptoms at all. The condition may be found only during examination for other medical conditions.

Common symptoms of Barrett’s esophagus include indigestionand heartburn. You may also experience difficulty swallowing food, nausea and vomiting. Less commonly, you may have blood in your vomit or pain when swallowing. Seek medical help if your symptoms do not improve in two weeks, or if you see blood in your vomit.

Most often, Barrett's oesophagus is caused bygastroesophageal reflux disease, which is also called reflux esophagitis. This condition occurs when stomach acids irritate your esophagus. While your stomach is lined by cells that are resistant to acidic environment, the esophagus is not. So, when acid goes up into the lower esophagus, inflammation can take place.

What Can I Do to Relieve Symptoms of Barrett's Oesophagus?

In most cases, Barrett’s oesophagus is not a serious disease. However, you can relieve most of its symptoms by making lifestyle changes and avoiding things that could result in acid reflux.

If you have GORD, you may be advised to make some dietary changes to improve your symptoms. These include eating frequent small meals instead of three big meals and eating less fatty foods. You must also avoid foods or drinks that can make your symptoms worse, such as:

Make some lifestyle changes to reduce symptoms of GORD, which are associated with Barrett's esophagus. These include the following steps:

What Are the Medical Treatments for Barrett's Oesophagus?

If your symptoms do not improve after trying home remedies, consult a doctor for further evaluation and treatment. Medical treatment for Barrett’s oesophagus usually includes the following measures:

Medical treatment is aimed at preventing or slowing the development of Barrett's oesophagus by controlling acid reflux. Medications include:

Surgical repair of a hiatus hernia may help reduce acid reflux. If the hiatus hernia affects the chest area, chest surgery may be necessary.

3. Strengthen the Valve of the Oesophagus

To strengthen the lower esophageal valve, a surgical procedure called fundoplication may be done. In this procedure, the surgeon may make a small incision on the abdomen and operate using a laparoscope. Another alternative is to operate through a large incision (laparotomy). The surgery results in reduction of acid reflux.

Another way to treat Barrett’s esophagus is to remove abnormal tissues, which may be done in different ways, such as: