The external jugulars are part of three separate jugular veins, all located in the neck. There are essentially three jugular veins that together drain blood from the head and neck into the lungs. These include the following veins:

Without the adequate functioning of these veins, the head would fill with blood and there would be significant edema of the face, scalp and neck. These are very large and very exposed veins in the neck. Any injury to these jugular veins can happen as a result of penetrating trauma which can be life-threatening if not repaired surgically very quickly. 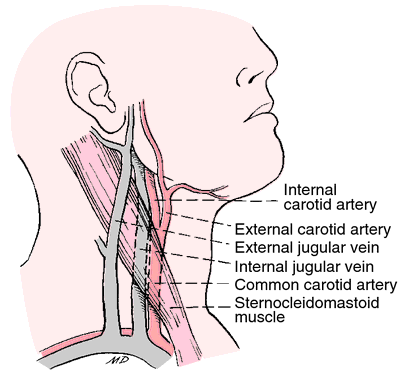 The external jugular vein is created by the confluence of two separate veins: 1) the posterior auricular vein which is the vein responsible for draining the top of the head and the area behind the outer ear, and 2) the retromandibular vein, also known as the posterior branch of the external jugular, which is important in the drainage of deoxygenated blood from the face.

The two veins join together at the angle of the jawbone, also called the mandible. The vein continues on to enter the thorax beneath the clavicle, finally terminating in the subclavian vein that goes on toward the heart, where blood is pumped into the lungs. In the lungs, the blood is given the oxygen it needs to supply the body with fresh blood.

Why It Is Important

Because of the superficial location of the external jugular vein, it is prone to being injured from a knife wound or other penetrating injury. It isn’t very deep to the skin so that a minor slash with a knife can easily puncture the vein, leading to excessive bleeding. In some cases, air from the outside can enter through a slash in the jugular vein and can get lodged in the right atrium of the heart.

More Kinds of Jugular Veins in the Neck

As mentioned, the external jugulars are part of a system of jugular veins, all of which converge in the neck area to eventually enter the right atrium of the heart.

These begin in the area of the hyoid bone, which is located in the front of the neck. It travels downward in front of the sternocleidomastoid muscle, which is a major muscle that is involved in the turning of the neck. At the bottom part of the neck, it goes beneath the sternocleidomastoid muscle, where it dumps blood into the external jugulars. In some cases, it doesn’t drain into the external jugular at all but ends up directly into the subclavian vein in order to travel down into the thorax where the superior vena cava enters the right atrium.

This is the vein that drains blood directly from the brain as well as parts of the face and neck. The internal jugular vein connects with the transverse sinus at the jugular foramen, which is the area at the base of the human skull that is the opening for the blood to drain from the veins of the brain to the outside of the skull itself.

Veins themselves aren’t as particular about their location and access points as that about the arteries, so there may be some variations in the appearance and the exact location of the vein. For example, the external jugulars might not be a single vein but may descend the outer portion of the neck as double set of "twin veins" that both lead to the subclavian vein in the lower part of the neck and the upper part of the thorax. This doesn’t affect circulation at all and is a normal variant to the single vein that most people have.