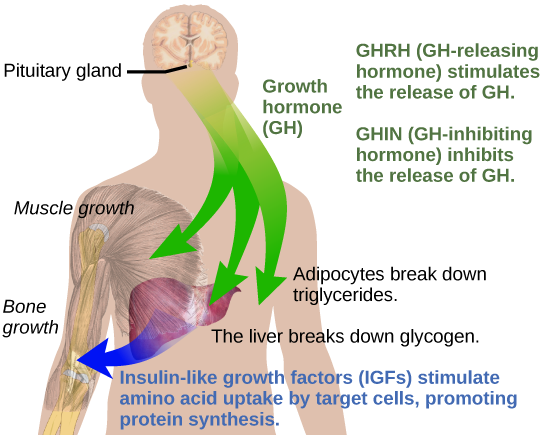 While the growth hormone ensures steady growth amongst children, the hormone balances the amount of muscle, body fat and bone in adults. The lack of growth hormone in children leads to slow growth; moreover, it leads to emotional symptoms like unenthusiastic behavior to work and high levels of tiredness. In adults, GH deficiency is normally related with pituitary tumors that have been tended to either through radiation or through surgery.

The deficiency can affect humans at any age. However, the deficiency isn’t hereditary and normally the condition isn’t transferred from parents to children.

The causes of growth hormone deficiency are normally difficult to know. The deficiency can either by congenital—the child might be born with it, or it can be a consequence of any medical condition. An injury to the brain can also be responsible for affecting the ability of the pituitary gland to produce growth hormone. Growth hormone levels may also be less amongst children who are either born with a facial or skull defect or get a facial or skull physical defect through an injury. For instance, children with a cleft palate or a cleft lip might have lesser growth hormone levels.

The symptoms of growth hormone deficiency in children are:

The symptoms of presence of little to no growth hormones in adults include:

Doctors start to look for a growth hormone deficiency once they notice that the children’s height and weight aren’t increasing as they should. When suspecting a case of GHD, the doctorsnormally question the children’s parents about the history of growth rates amongst the family. The doctors might also ask the parents about their growth rateat the time when they were close to reaching puberty.

Normally, the injections are only given till the children reach puberty after which children start to produce the hormones on their own. However, in some cases, the injections need to be administered for life.

Growth hormone injections work for adults as well. Similar to the case of children, the injections need to be administered daily with their side effects, including headaches, pain in the hip and scoliosis.