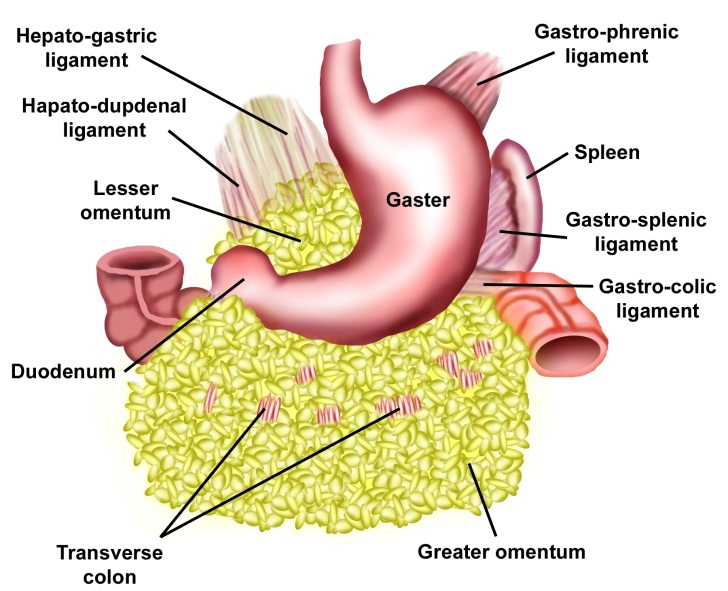 The omentum is a part of the body that is found in your lower abdominal area. It is made up of two layers of fatty tissues and both supports and covers the organs and intestines found in this area of the body. There are two parts of the omentum, the greater omentum and the lesser omentum, which are responsible for storing fat deposits and connecting the intestines and stomach to the liver respectively. This article will explain on the structure and function of the greater omentum and the lesser omentum.

What Is Greater Omentum?

The greater omentum is also known as the epiploon, gastrocolic omentum, omentum majus or great omentum and is sometimes called the caul when referring to animals. This part of the body is visceral peritoneum in the form of a long fold hanging down and starting at the stomach. The greater omentum goes from the stomach’s greater curvature before passing by the small intestines and then reflecting on itself before ascending the transverse colon. Finally, it reaches the posterior abdominal wall. The greater omentum gives the appearance of floating on the intestines’ surface which is how it got its name “epiploon” which comes from the Greek word that means to sail or float on (“epipleein”).

The greater omentum is responsible for fat deposition and contains amounts of adipose tissue that can vary from person to person. It also contributes to immunity and contains macrophage collections. In addition, the greater omentum isolates infections and wounds as it will sometimes wrap around infected areas or those that have experienced trauma.

What Is Lesser Omentum?

The lesser omentum is also known as the gastrohepatic omentum or small omentum. This is part of the peritoneum that is found in a double layer and goes from the beginning of the duodenum and stomach’s lesser curvature to the liver.

In contrast with the greater omentum, the lesser omentum has the distinction of being very thin. It is continuous with the peritoneum layers that cover the postero-inferior and antero-superior stomach surfaces as well as the first portion of the duodenum.

The two layers that make up the lesser omentum go to the stomach’s lesser curvature as well as the upper portion of the duodenum. When they reach this point, they join together forming a double fold and then ascend until they reach the porta hepatis.

On the left side of the porta hepatis, the lesser omentum attaches to the fossa that is for the ductus venosus, specifically the bottom portion. It then follows this path and reaches the diaphragm at which point the two layers of the lesser omentum will separate and cover the end portion of the esophagus.

On the right side of this lesser omentum, the layers remain continuous and they create a free margin that is considered the epiploic foramen’s anterior boundary.

The lesser omentum contains several divisions of ligaments that are connected to the liver on one side, which is why each one contains the prefix “hepato.” In most cases, the lesser omentum is only divided into two ligaments: the hepatogastric ligament connects with the stomach’s lesser curvature and the hepatoduodenal ligament connects with the duodenum.

How to Shrink Omentum

When it is healthy, the omentum has a lace-like and transparent appearance and when it is unhealthy, it’s filled with fat, looking opaque and thick. When it is unhealthy, it can lead to health issues such as unhealthy arteries, inflammation or unstable blood sugar. Ideally men should have an omentum that is 35 inches and women’s should be 32.5 inches. The best way to measure it is to suck in your stomach as much as you can and measure by your belly button as the omentum can’t be sucked in.

It can be very challenging to shrink the omentum (or belly fat), especially if you have other health problems. You should try to find a regular sleep cycle, eat natural foods (while avoiding ones with high sugar or fat such as fried foods) and eat more whole grains. Walking is also a great way to reduce the size of your omentum.