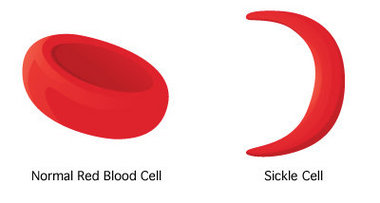 Is Sickle Cell Trait a Concern?

For most people who have sickle cell trait, they will experience no symptoms or complications. On rare occasion, there may be a small amount of blood in the urine. Some people have a hard time tolerating high altitudes, or experience serious dehydration, or exercise too intensely. All these can cause the red blood cells to begin to sickle, lead to muscle breakdown, glaucoma in the eyes, and reduce blood flow to the spleen. And finally, there have been, rarely though, reports of renal medullary carcinoma, a rare form of kidney cancer, in people with sickle cell trait.

For the most part, sickle cell trait is not a major health concern for most carriers. Women who are planning to have children should take extra steps to make sure both parents do not have the sickle cell trait. This way, parents can make an informed decision about starting a family or prepare for the possibility of having a child born with sickle cell disease.

What Are the Risk Factors for Sickle Cell Trait?

Sickle cell trait is a genetic condition that runs in families and people from certain geographic locations such as:

The good news is laws in most states require all newborns be tested for the sickle cell trait or sickle cell disease at birth. Babies are tested as a requirement before they leave the hospital. Knowing early on can help doctor begin the treatment early and avoid complications.

How Is Sickle Cell Trait Diagnosed?

If you are in one of the high risk groups above, there is a test for sickle cell trait. The sickle cell trait test is a very easy blood test that can tell you if you carry the gene. This test is performed at most major hospitals and involves a small stick in a finger. For newborns, they usually perform a heel stick. They look at the blood under a microscope and the evaluation will reveal whether or not the sickle cell trait is present.

If the sickle cell trait test comes back positive, you will most likely be referred to a genetic counselor. They will ask for your family medical history. If you are planning a family, your partner will need to be tested for the gene and give their family history. This will help with family planning and help reduce the risk of having a child born with sickle cell disease.

For more information about sickle cell disease, please refer to: What Is Sickle Cell Anemia? and Sickle Cell Disease.