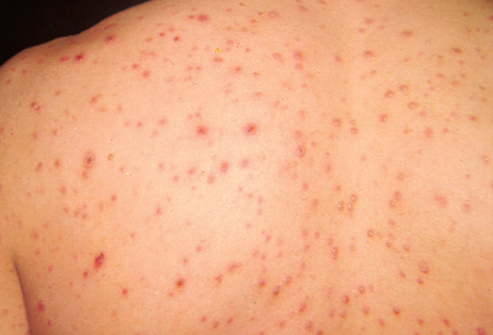 Chickenpox is a common childhood infection. Although many people think that chickenpox affects children only, many adults are not immune to the viral infection that causes chickenpox. In fact, this disease often has worse effects on adults than in children, so it is important to recognize chickenpox in adults as early as possible.

Chickenpox or varicella is a highly contagious disease that results from the spread of varicella-zoster virus. It spreads easily when infected people cough or sneeze, releasing the virus through the air. The infection can also spread through contact with the chickenpox blisters of an infected person. Chickenpox is highly contagious, and people who have never had the disease nor received vaccination against it may become infected when they come in contact with someone who has it. Transient exposure, however, may not result in infection.

Is It Possible to Get Chickenpox Again If I Had It Once Before?

If you are an adult and you have had chickenpox once before, then you may have the risk of developing varicella zoster virus later in life, however, not in form of chickenpox, but in form of shingles. So generally speaking, when we say chickenpox in adults, we actually mean varicella zoster virus in adults. And when you experience shingles as an adult, it could cause painful or burning sensation on the skin as well as tingling or prickling sensation.

Can Chickenpox Be More Serious in Adults?

Chickenpox in adults can be more severe, especially among the elderly. Symptoms of chickenpox that can be very taxing include:

People who suspect that they have been exposed to chickenpox virus or develop chickenpox symptoms should seek medical advice immediately.

Are There Any Complications with Adult Chickenpox?

Chickenpox in adults can lead to several complications. The itchiness of the rashes can result in scratching and inflammation of the skin, which can also become infected with bacteria. This can lead to a delay in the healing of the skin lesions, as well as scar formation.

How to Prevent Chickenpox in Adults

The US Centers for Disease Control and Prevention (CDC) recommends getting two doses of chickenpox vaccine for people who have not had the infection. This has been found to be 98% effective in preventing chickenpox in adults. Adults who come in close contact with young kids are more likely to be infected and should consider getting the vaccine.

To prevent shingles, a reactivation of the chickenpox virus in the body, one can also get Zostavax, which is recommended for the elderly (ages 60 and above), who have an increased risk of getting the infection. The vaccine may not completely protect you from shingles, but it can make your rashes less painful and can help heal them more quickly.

Who Should Get Chickenpox Vaccine?

Experts recommend the chickenpox vaccine for all susceptible individuals (children and adults) who do not have any contraindications for vaccination. Children, teens and adults who have previously received only one dose may get a second dose or catch-up dose of varicella vaccination.

Other susceptible groups of people who have not been vaccinated or have not had chickenpox should receive the vaccine to reduce their risk of developing chickpox in adults:

People who are not immune to chickenpox but have been exposed to the virus should receive vaccination to prevent chickenpox in adults or reduce the severity of illness. Vaccination is most effective if administered within 3 to 5 days (72 to 120 hours) of exposure. Vaccination is still recommended 5 days after exposure to prevent disease if current exposure does not lead to disease.