Function and Role of Immune System

The immune system is composed of specialized cells, various proteins, tissue and organs. The immune system works to defend us against hordes of microorganisms and germs that we are exposed to every day. In majority of the cases, the immune system performs and excellent job of preventing diseases and infections and keep us healthy. However, in some cases, problems can occur in the immune system, which can lead to occurrence of numerous illnesses and diseases. 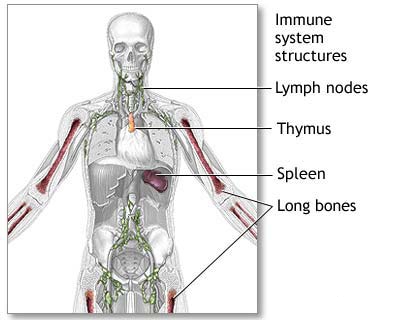 What Is the Function of the Immune System?

Leukocytes are manufactured and stored in multiple organs of the body such as the spleen, bone marrow and the thymus gland. Hence, these organs are referred to as the lymphoid organs. Clumps of lymphoid tissues are also present throughout the body in the form of lymph nodes that contain the leukocytes.

The circulation of the leukocytes in the body takes place between the lymph nodes and the various organs through the blood vessels and lymphatic vessels. Hence, the functioning of the immune system occurs in a coordinated manner, thereby, monitoring the body against disease causing germs and microorganisms.

Leukocytes are divided into two main types as: phagocytes and lymphocytes.

How Does the Immune System Work?

When foreign particles or antigens invade the body, the various types of immune system cells work in combination to recognize and destroy them. The B lymphocytes are triggered in the process producing antibodies, which are specialized proteins that block specific antigens.

Once these antibodies are produced, they remain in the body and if the same antigen invades the body again, they are already present to block the antigen. Hence, if a person gets a specific disease, that person will not get sick with that disease again. This is the principle used behind immunizations used to prevent diseases.

After an antigen is locked by an antibody, the T cells come into action and destroy the antigens tagged by a particular antibody. T cells are therefore, sometimes referred to as killer cells.

Antibodies can also help in neutralizing toxins secreted by the microorganisms. They also help in activating a specialized group of proteins referred to as complement that helps in destroying viruses, bacteria and other infected cells.

The body is thus protected against diseases by these specialized cells of the immune system and this protection is referred to as immunity.