What Does the Uterus Do?

The uterus has several important functions in the body including multiple reproductive functions such as implantation, gestation, labor, delivery and menses. When an egg is releases from an ovary, it travels along the fallopian tube which is where a sperm cell will fertilize it (if it becomes fertilized). The endometrial layer of the uterus thickens to provide the fertilized egg a location to implant in. If the egg is not fertilized, however, menstrual bleeding occurs due to the endometrial layer dissolving and going out through the vagina. Because of this, the uterus or womb is responsible for the menstrual cycle and the beginning of these menses is one of the signs of puberty. 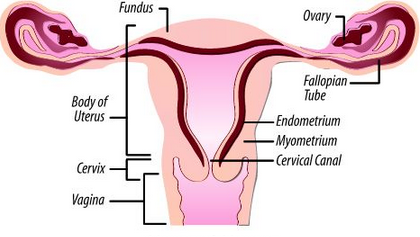 The uterus also responds to hormones, directing the blood that flows towards the vagina. During intercourse, the uterus contracts and this helps the sperm reach the fallopian tubes. The uterus plays a role in both regular menses and reproduction. As mentioned, an egg that is fertilized in one of the fallopian tubes will enter the uterus and be implanted in the endometrial lining. Then the womb provides nourishment allowing the egg to grow into a fetus and continue to develop during gestation. The uterus is incredibly elastic and as the fetus develops, the womb will stretch to hold not only the baby, but also the placenta and a liter of amniotic fluids. The uterus also gives structural support for both the bladder and the bowels.

The uterus is also designed so that its contracts make childbirth easier. During pregnancy, the cervix (which is part of the uterus) is closed and remains thick. When labor approaches, however, the womb begins to contract and the cervix is pulled upwards. Eventually the contractions lead to the cervix dilating fully reaching a diameter of 10 centimeters to accommodate the baby’s head. Additional pressure from the uterus is applied during labor and this is what pushes the baby downward, leading to birth.